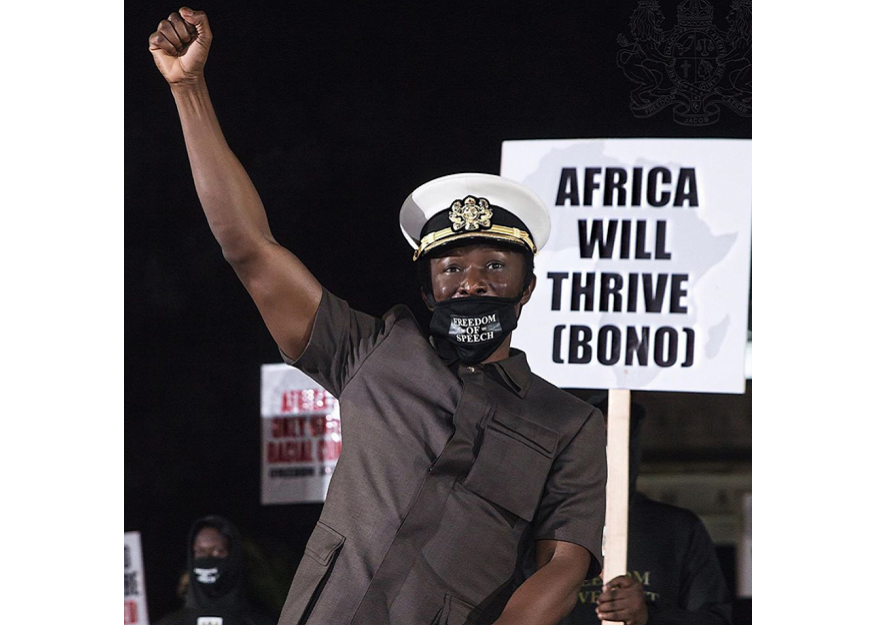 The world will not be the same when the dust settles after the COVID-19 pandemic. Projections for a post-COVID-19 world are already underway.  Will it be an era of new global power configurations? How will the impact of COVID-19 shape the global social landscape?

Coincidentally, the pandemic became more noticeable during the February 2020 Black History Month. Some were drawing attention to critical issues affecting Africa and Africans. The ‘black lives matter’ chants were then suddenly overshadowed by the unfolding pandemic. In Ghana, plans were underway for a sequel to the successful Year-of-Return program. How sad!  Global tourism is now at a near standstill.

One would have thought the attention of the world would be focused on collective efforts to combat the novel Coronavirus pandemic but this was not to be.

By April 2020, all manner of racial threats were lobbed at the Ethiopian-born Director-General of the World Health Organization, Dr. Tedros Adhanom Ghebreyesus. In the midst of the global turmoil, reports of attacks on black people living or studying in China began to emerge. What was surprising was the lame attempt to blame another ‘hot zone’ virus on people of African descent. Admirably, the reaction and condemnations by African governments and the African diplomatic corps in Beijing were swift and to a good effect.

Still, the pandemic has lessons to teach about human vulnerability. We must acknowledge that in the wake of this health crisis, all races (African, Asian, Caucasian, etc) have not been spared by this non-discriminatory virus. This pandemic has shown how quickly human society can regress into old patterns of thought and behavior even with a plethora of international treaties and laws that seek to abolish the last vestiges of human errancy.  International treaties may not mean much to panicked populations and when it’s a matter of life and death, anything can happen out there on the streets. Scapegoats of every color can easily be found. It only depends on where you are at any given moment and what street you’re walking down.

Then in May 2020, another tragedy struck! George Floyd!!!

All people, regardless of race, can easily become victims — or even victimizers – given the circumstances.  But what makes Africans and people of African descent especially vulnerable to racism and xenophobia?

I reflected and groped for answers. I questioned why some of the major religions – Islam, Judaism, Christianity, and even to some extent, African indigenous religion — were used to justify the slave trade and colonialism.

A quote in John Wright’s book caught my attention: ‘What are they made for but to serve us?  Go and take them, for they are Kaffirs and we cannot do without them’. (Arab boy, quoted by George Lyon (1820) in John Wright. The Trans-Saharan Slave Trade.)  The author proceeded to list the (4) major types of slavery on the African continent from the Fifth Century up to 1833 namely:

Could there be deep-seated, sub-conscious attitudes towards Africa and Africans still lingering in our modern era? I thought about the unimaginable impact of nearly a thousand years of servitude and slavery (dark Africans being the dominant victims) and how that might have solidified common stereotypes of African people. I tried to shrug it off, but it wouldn’t go away. There’s no silver bullet to fix racist attitudes in our murky world – and racism goes a lot of different ways. Anyone can encounter racism anywhere at any time.

However, as Africans, even though there’s little we can do about the past, it’s within our innate capacity to change our future. It starts from a strong belief that we can create a better future for ourselves…if we are truly willing to work to that end. There is more to our story, more to our past, present, and future than simply being the ‘slaves, hewers of wood and drawers of water’ of the world. Some countries in regions of utter aridity have made it. But it takes collective effort to make it. We must develop that winning mindset.

If there is one thing to be gained from the COVID-19 pandemic, it is the realization that we must work together as one indivisible continent with a vibrant diaspora striving for the following:

It will require extra hard-work to diffuse or erase the negative images about Africa and Africans. The ‘dark continent’ label was stamped on Africa by outsiders. This led to the political and economic subjugation as well as the ‘Islamization’ and ‘Christianization’ of a continent. It’s time to embrace science, technology and research to propel our advancement. The continent ought to strategize and skirt around our ‘image woes’ in mainstream media. For example, the A.U. may help accelerate the implementation of communication and media strategies to ensure balanced reportage on Africa and Africans.

Putting the continent’s house in order means a rejection of being the face of misery, destitution, and squalor and that also amounts to assuming primary responsibility for our own development.

History will judge whether (or not) the international community acted swiftly enough to nip the coronavirus in the bud. As that debate rages on, Africa will have to count the cost in relation to the brunt of the pandemic. The continent must emerge from the pandemic with renewed ‘can do spirit’ of self-sufficiency. It’s a matter of urgency. In times of crisis, people must help themselves first before helping others. This bitter truth should inspire the A.U. to consider a trade policy with a tinge of autarky to protect the African market. Following the adoption of the ACFTA Agreement, it would be advisable to expedite action on African trade agreements with other free trade areas/partners to ensure the continent derives maximum benefit and collective strength from these agreements. There would also be the need for crafting a transformational template for granting mineral exploration and mining rights, with the stipulation that minerals must be processed in Africa before being exported.

The over-dependence on processed goods from outside will keep us in a perpetual state of impoverishment. Ghana’s One District, One Factory and moving beyond aid deserves replication elsewhere on the continent. Perhaps, by choosing to process our resources, our partners would begin to accord us the respect that we deserve because we would have created a stronger economy as well as proven that we have come of age. A resurgent and roaring African Lion would go a long way toward helping to change attitudes towards Africa and Africans.

Luckily, a lot is going well in the continent because of the advantage of having a youthful population. Governments taking action to provide accessible, quality education deserve the loudest applause. An educated and skilled populace will help sustain the current tempo of the continent which boasts of having not less than five countries among the fastest growing economies in the world.

The lull in global markets (and a fast-approaching global economic recession) means the continent would have to brace itself with common antidotes to deal with the fallout from shrinking markets for African goods, services and tourism. The COVID-19 pandemic has had a disproportionate impact on people of African descent in some western countries. How will this further impact the purchasing power and remittances for African economies? The full extent of the pandemic’s impact could be part of an evaluation of the incapacitating debt servicing obligations confronting African economies.

As Africa pushes its way forward on these and other issues, the continent must come out of this pandemic with new strategies for statistical data management of its human and natural resources. It was so remarkable to see the daily counts of patients and confirmed COVID-19 cases from the various countries. The continent should build on that plus to create reliable data for national planning and decision making.

The operationalization of ACFTA and implementation of Agenda 2063 are great markers of political will and commitment. The post COVID-19 period should witness the successful implementation of the big regional and global plans not forgetting about the SDGs.

In the nutshell, it doesn’t have to be re-stated that Africans are not less endowed (in faculties) than other humans. The study of the rise and loss of influence of civilizations can be our useful guide. During the past 70 years, Asian nations have steadily laid the blocks for strong economies. That remarkable example should serve as a source of motivation for Africa. The Japanese focused on electronics and autos, Indians are into ICT, Thailand, the world’s kitchen, Singapore for cleanliness and trust, while China became the world’s factory. Was there a time not so long ago, when some of these countries lagged behind some African and European countries in standard of living?

As for those who hate others on grounds of race or ethnicity, we can advise them to go and read John Howard Griffin’s Black Like Me for the redemption of their souls.

If the innumerable people who fought for equal rights, fought against racism, discrimination and xenophobia, etc were to resurrect today, will they be shocked that in 2020, some human beings have still not shed their ethnic, racist and sectarian bigot-tendencies? I believe Dr. Kwegyir Aggrey, Ottobah Cugoano, Olauda Equiano, Booker T. Washington, Frederick Douglass, Dred Scott, Dr. Martin Luther King Jnr, among others, will be reciting a supplication for racial harmony and peace in our world.

To conclude, Africa and Africans should ask the ultimate questions: ‘What do we wish to be known for in the next 50 years? What ethos do we need to drive our progress?’ The answers are within us during — and  — after — COVID-19.

“Hating people because of their color is wrong. And it doesn’t matter which color does the hating. It’s just plain wrong” – Muhammad Ali