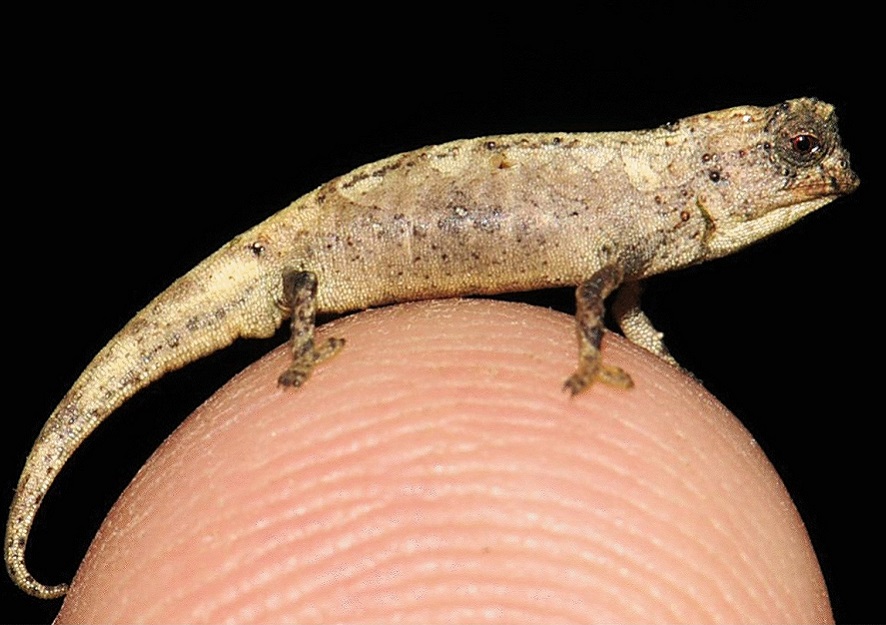 Scientists from Germany and Madagascar have discovered what they claim to be the world’s tiniest reptile. Named Brookesia nana or nano-chameleon, the species – discovered in the mountains of northern Madagascar during an expedition in 2012 – is so tiny it can fit on the fingertip of a human, DW reported.

Upon discovery and inspection, scientists were later able to conclude both the male and female species of the chameleon were adults as the former had very huge genitals while its counterpart had eggs in her body. The male species also measured at 13.5-millimeters (0.53 inches) in length while the female was a bit smaller. They, however, could not establish why the reptiles are that tiny.

“You have to really get down on your knees to find them,” Frank Glaw, a herpetologist at the Bavarian State Collection of Zoology in Munich, told the Associated Press, the news outlet reported. “They are obviously camouflaged and move very slowly.”

According to AFP, islands that are situated next to neighboring continents have long been known to be the habitat for smaller species of animals that crossed ephemeral land bridges that are referred to as “island dwarfism.” Scientists, however, said that the “island effect” is not the case of the Brookesia nana.

Despite their discovery, scientists have said their survival is threatened as a result of deforestation on the African island nation.

“The nano-chameleon’s habitat has unfortunately been subject to deforestation, but the area was placed under protection recently, so the species will survive,” Oliver Hawlitschek, an evolutionary biologist at Hamburg’s Center of Natural History, told DW.

Deforestation due to human activities including slash-and-burn agriculture and illegal logging has long been a major issue in Madagascar. A 2019 study by the Nature Climate Change journal said the island nation could completely lose its eastern rainforest by 2070 if deforestation and climate change continue to persist with the ongoing momentum.

The island nation is classified as a global “biodiversity hotspot” as it hosts five percent of the world’s unique plant and animal species, AFP reported.