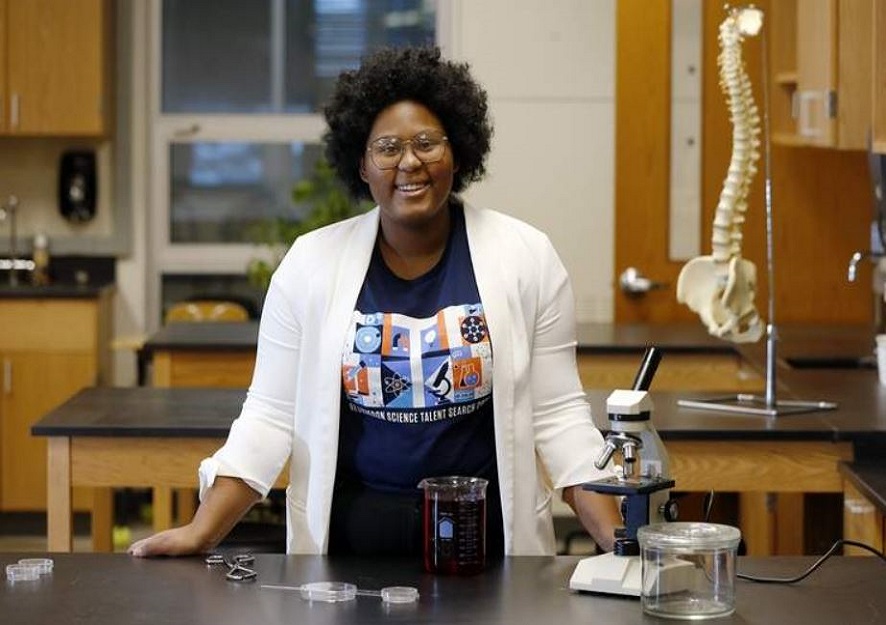 A 17-year-old high school senior hopes her science experiment will be instrumental in saving lives in developing countries. Dasia Taylor has developed a color-changing suture that will make it easy to detect infections.

The sutures will change color if the PH level of the patient alters, making the detection of infections faster and easier and that was the most important aspect of her research. When the PH level alters, it indicates the presence of an infection which leads to its early detection.

Ultimately, it will make the early detection of infections in developing countries a lot easier, so they are quickly treated with antibiotics to cut down the costs of expensive treatments.

Taylor did not start by wanting to experiment with sutures in a lab growing up. She nursed the dream of being a surgeon, but a suture gift one Christmas sparked her curiosity in STEM, and she went for it.

“Even if you don’t know what you’re doing, just go with it,” Taylor told reporters. “I stand by the idea that I stumbled into STEM by way of intellectual curiosity. Be curious, because that will afford you so many opportunities.”

The Iowa City West High School senior is now a Regeneron Science Talent Scholar for her research work on the color-changing sutures.

She took up the task outside normal school hours with the help of her science teachers. After a year of intensive research, she entered her work into the 80th annual Regeneron Science Talent Search.

Taylor was named a part of the top 300 scholars out of the 1,760 students who made submissions. Her research primarily focused on the suitable material for the stitches and learning how to work in a sterile environment to test bacteria as well as how to wear gloves properly.

Her high school was kind enough to give her bacteria from its labs for the research. “I wanted to conduct research. I didn’t think I was going to get this far,” Dasia recalled. “This was really a chance for me to branch out and use my creativity.

“I love my project, and to find out that it was working and to get the results I did, I was over the moon.”

The first time the public saw her experiment was in March 2020 at the Junior Science and Humanities Symposium. Most Black people stay away from STEM and for a Black girl walking into the competition with her afro, Taylor stood out from the crowd.

That notwithstanding, she had worked on her studies for a year and had done a lot of trial and errors so she walked into that competition full of confidence and she won with her head held high.

“Being in the room knowing stereotypes were flying and to be able to prove them wrong and win first place was phenomenal. My mom and I talk about it all the time. I often find myself in white-dominated spaces. That’s definitely one for the books,” Taylor told the Gazette.

The young researcher could be named one of the 40 finalists to receive $25,000 as a Regeneron Science Talent Scholar and participate in the final competition in March 2021 for the grand prize of $250,000.

Still unsure of what college she will attend after high school, Taylor wants to major in political science and wants to be a lawyer. In the last four years, she has been dedicated to equity and restorative justice in her community.

“I’m a firm believer (that) you don’t have to be confined to a box and just stay in one subject area. You can bounce around. If you’re interested in it, go for it,” Taylor said.