Weeks before Floyd’s death, three of the cops involved… 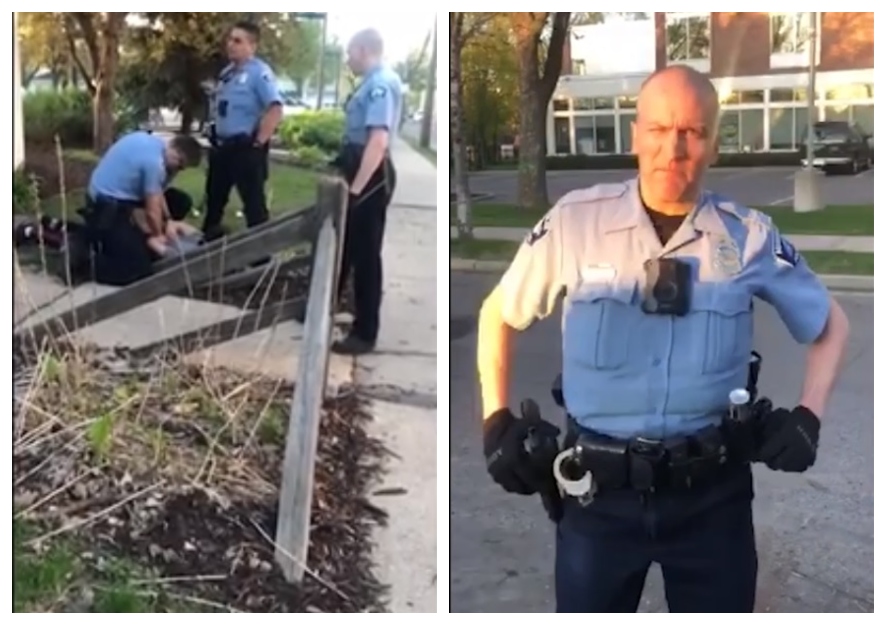 Three of the same Minneapolis officers who were involved in the fatal George Floyd encounter were filmed roughing up an innocent Black man just three weeks before Derek Chauvin knelt on the 46-year-old’s neck till he died.

According to the Star Tribune, Chauvin, together with officers Thomas Lane, J. Alexander Kueng and Luis Realivasquez, were responding to a May 3 call from a woman who claimed she was being held hostage by armed men at an apartment in South Side. Kueng and Lane had just recently joined the force and were on field training.

When the officers arrived at the scene, they met Adrian Drakeford – a Black man who also lived in the apartment building – as he was leaving the premises. Without any provocation whatsoever, the officers reportedly tackled him to the ground and handcuffed him, saying they thought he had a knife. It later turned out Drakeford did not have any knife in his possession. It was rather a knife sharpener and the officers later admitted that. Drakeford was also not one of the hostage-takers.

In the video of the incident obtained by the news outlet, officer Chauvin can be seen observing Kueng and Lane handcuffing Drakeford – who is on the ground – while bystanders tell them to take it easy on him and also tell them he did nothing wrong. In response, Realivasquez tells the crowd to “back up” and pulls out a can of a chemical irritant. Drakeford’s girlfriend and brother also witnessed the incident and tried telling the officers they got the wrong person.

“He didn’t do nothing!” his girlfriend said.

Drakeford was later released without any charges filed against him. His brother was arrested and slapped with a misdemeanor charge of obstructing the legal process. That charge was, however, later dropped by the Minneapolis City Attorney “in the interest of justice” following a review. Officers could not also locate the woman who made the call and were unable to establish if she was still being held by the supposed armed men.

“It’s not the style of policing you want to see any law enforcement practice,” Andrew Gordon, deputy director for community legal services at Legal Rights Center, a Minneapolis-based nonprfit, told the Star Tribune. “Their interest is not necessarily about investigating a crime. … Their interest is to put these kids in their place.” Gordon also represented Drakeford’s brother.

In an interview, Drakeford’s brother said one of the neighbors who was at the scene and was among the people calling out the officers, actually lived at the address the officers were called to. They, however, did nothing.

“They took me to jail and they didn’t even investigate the guy they were there for,” he said.

On May 25 (twelve days after the incident), Chauvin, Lane and Kueng responded to the 911 report of Floyd attempting to make a purchase at a grocery store with a counterfeit bill. Realivasquez was not involved in the Floyd encounter. Unlike Drakeford, Floyd died in the hands of the three officers.

“The timeline here is troubling,” Gordon said. “The same officers are involved in the murder of George Floyd, using some of the same techniques and the need and desire to control people.”

Drakeford’s incident drew similarities to Floyd’s death. Just like Drakeford, Floyd was aggressively tackled to the ground by Chauvin, Lane and Kueng. While Chauvin had his knee on Floyd’s neck for almost 9 minutes, he ignored pleas from bystanders despite Floyd also telling him that he could not breathe.

Floyd’s death triggered unprecedented nationwide protests against police brutality on Blacks and other minorities as well was racial discrimination in the United States. The protests ultimately went global.

Prior to the Floyd and Drakeford incident, quite a number of misconduct complaints were reportedly brought against Chauvin. Gordon told the Star Tribune he was surprised Drakeford’s wrongful arrest and the officers’ failure to get to the bottom of the 911 call, coupled with Chauvin’s misconduct complaint history, did not prompt any of their superiors to look into how these officers handle such encounters.