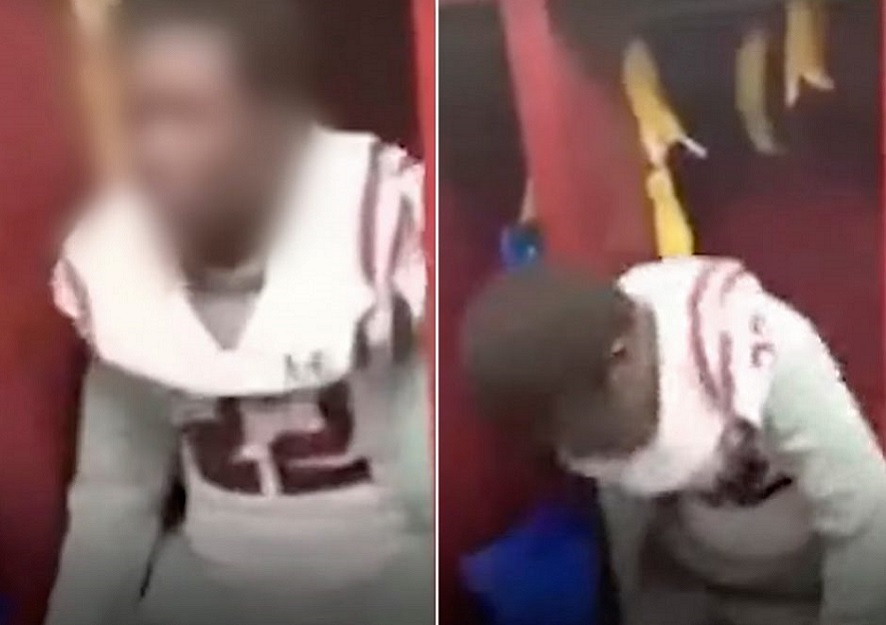 Rock Island County State’s Attorney Dora Villarreal announced their Juvenile Division has taken over a case involving a video that showed a Black Moline High School football player being forced by his teammates to sit in a locker filled with banana peels.

The video, which was reportedly shot on Thursday and circulated on social media the next day, drew the ire of community members who labeled it as racist. Both the Moline Police Department as well as the Moline-Coal Valley School District subsequently announced they were going to separately investigate the incident, ABC News initially reported.

In the video, an unidentified teammate can be heard forcing the Black student-athlete to sit in a locker that has banana peels hanging from its top. The teammate is also heard threatening to break both of the Black player’s knees if he doesn’t comply. After he sits on the chair in the locker, his other teammates can be heard screaming, “Yeah!”

Moline Police Chief Darren Gault described what transpired in the video as a “disturbing racist scene.” He added that the teammates who participated in it were “of both different and similar races to the victim.”

“Regardless of these facts, we all agree that this is a disgusting way to treat a fellow teammate, a fellow human being and most certainly a friend,” Gault added.

Detectives with the city’s police department interviewed the players when they arrived back at the school after playing an away game on Friday. Detectives further pursued the case throughout the weekend and presented the outcome of their investigations to prosecutors, ABC News reported.

“The video depicted a young man who was confirmed to be a student and football player at Moline High School,” Villarreal said in a press release Monday, according to KWQC. “Upon review of all the facts gathered by the Moline Police Department, numerous witness interviews and diligent investigation by the Moline Police Department and cooperation by students and staff, this Office has referred the matter for appropriate action in our Juvenile Division.”

The Moline-Coal Valley School District also announced they have launched a separate investigation to ascertain if the students’ actions flouted school or district policies. “The vile behavior depicted in the video does not represent our core values and has no place in our learning community,” Candace Sountris, a spokeswoman for the school district, said in a statement. “Clearly, we have work to do. Decisive action will be taken upon the conclusion of both the law enforcement and the school district’s internal investigation.”

Meanwhile, the Black student, who was forced to sit in the locker with the banana peels, released a statement appreciating the concern but pleaded with people to “stop talking about the incident and video.”

“I want to make it known that I’m fine. Everyone is worried about me and showing concern for me and I really appreciate it,” he said, KWQC reported. “Second, can everyone please stop talking about the incident and video? I understand everyone wants justice for me and they want what they think is right to be done, but I already made my feelings known to the police and my friends about how I feel about everything.”

He also said he wants to move past the incident and called on people to not intimidate his teammates who were involved in it.

“I love the football team I’m on and they’re good guys. I know that personally. I talked to the people involved individually and they apologized,” he added. “We had a heartfelt talk about it and I told them how I felt. So please don’t harass, bully, or threaten them at all. Lastly, I want to get my life back together, and my student-athlete life back on track, so if you do ever see me or know who I am, treat me as a human first, not a victim.”

Worth $400m, Shaq makes more money now than he ever did in his playing years. Here’s how
South Africans anxious over pause in use of J&J vaccines – The Associated Press