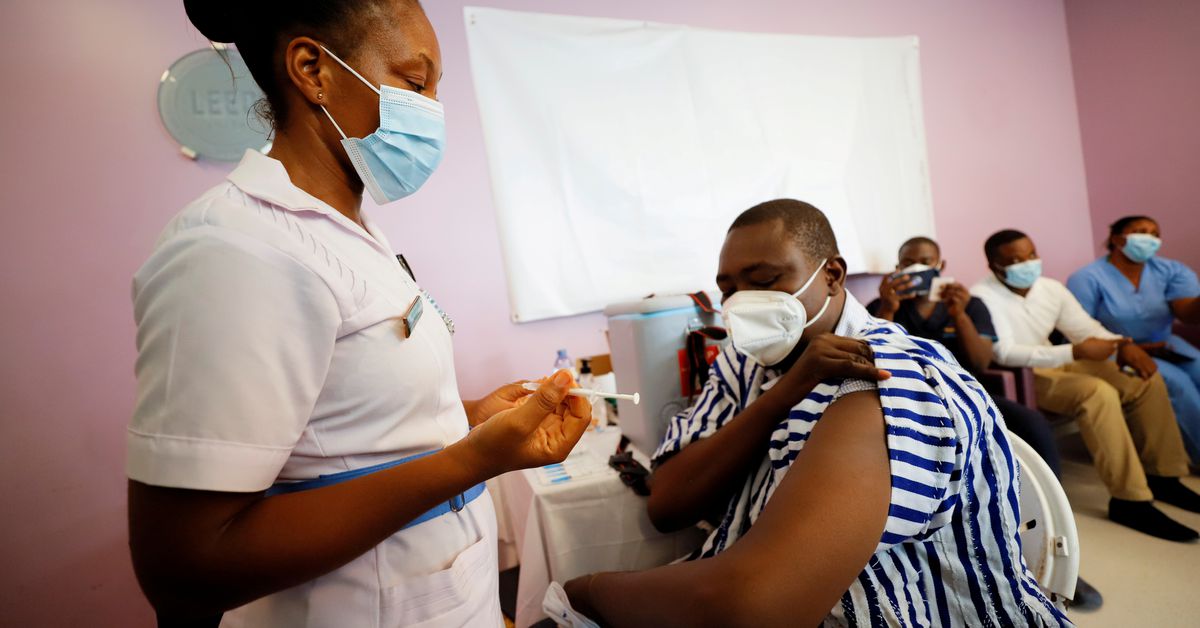 When Ghana received 50,000 COVID-19 vaccine doses from India last month, it hit a frustrating roadblock: it had not trained enough staff to distribute them.

The country was still rolling out shots received in late February from the global vaccine-sharing scheme COVAX, and didn’t have the capacity to expand that operation, according to the head of Ghana’s immunisation programme.

Rather than going straight into the arms of health workers, the additional doses were put in cold storage in the capital Accra, Kwame Amponsa-Achiano told Reuters, adding that his team had received two days’ notice about the shipment.

“We were in the middle of the first campaign,” Amponsa-Achiano said. “How do you plan for 50,000 when you already are doing another campaign?”

The problems faced by Ghana, one of sub-Saharan Africa’s more economically developed nations, illustrate how a continent with experience in battling deadly infectious diseases has found itself ill-prepared to inoculate people against this pandemic.

Many African countries, already facing a shortage of affordable vaccines, are being stunned by the unprecedented scale of the distribution challenge when doses do arrive.

Authorities do not have enough equipment like masks and cotton wool because of funding shortfalls that could total billions of dollars, according to more than a dozen health experts and some internal government documents seen by Reuters.

They also lack sufficient personnel and training to distribute vaccines at short notice.

While Africa has thus far been relatively unscathed by COVID-19, some experts fear stuttering rollouts could draw out the outbreak in the region, potentially leading to more deaths and economically damaging restrictions in a continent that is already the poorest in the world.

Benjamin Schreiber, COVAX coordinator at the U.N. children’s agency UNICEF, said logistical problems could mount in the coming weeks and months as countries tried to get vaccines to their general populations.

“As we start rolling out bigger quantities, we are going to start seeing more issues,” Schreiber said.

“The gaps in the healthcare systems will be the gaps that hinder the rollouts,” he added. “My worry is that we miss complete communities.”

Ghana, where the novel coronavirus has infected more than 91,000 and killed over 750, is considered one of the better-prepared countries in Africa to carry out a mass vaccination drive because of its political stability and economic development.

The government aims to initially inoculate 17.6 million people – about half of its population – at a cost of $51.7 million, according to a national plan seen by Reuters.

It hopes to cover $7.9 million of that money with a World Bank loan but is short of $43.8 million, described as a “funding gap” in the internal government document.

Immunisation chief Amponsa-Achiano said he was not aware that the situation had changed since the plan was formulated in February.

The Ghanaian finance and health ministries did not respond to requests for comment.

Ghana was the first country in the world to receive a shipment from COVAX, taking delivery of 600,000 doses of the AstraZeneca/Oxford University vaccine, manufactured in India, on Feb. 24.

While that vaccination rate is better than many of its African peers – Ivory Coast vaccinated just over 53,000 people between March 1 and April 6 – it is far behind the fastest countries globally. Britain, for example, administered doses to about 2 million people in roughly the first month of its drive.

Money is needed across the board, including $1.5 million for 11 walk-in cold rooms and over 650 fridges to keep vaccines at between 2 and 8 degrees Celsius.

About $25 million is needed for supplies and waste management, including 33,600 boxes of face masks, 240,000 bottles of hand sanitizer, and nearly 55,000 rolls of cotton wool, the plan says. About $21 million is needed to train over 171,000 health workers and volunteers.

To add to Ghana’s challenge, its next COVAX shipments, expected in April and May, have been delayed until June, because India suspended major exports of vaccines manufactured there.

In its 2021 budget, outlined in mid-March, the Ghanaian government allotted 929,296,610 cedis ($160 million) for vaccine acquisition and deployment.

Amponsa-Achiano said, though, it was not clear how much would go towards distribution, or when the funds would materialise.

It is a common problem in Africa, UNICEF’s Schreiber said.

“The question is at what point will this funding hit the ground? Will it be in time?”

Some African authorities are familiar with deadly contagions. Since 2018, Congo has contained four Ebola outbreaks with a vaccine which must be stored at between -60 and -80 degrees Celsius.

But the scale of the COVID-19 vaccination drive is new.

COVAX – the donor scheme co-led by the World Health Organisation (WHO) – has delivered over 18 million doses to 41 African countries, according to Reuters data.

That’s the first wave in a drive expected to deliver 600 million doses to Africa this year, enough to vaccinate 20% of their populations. Russia, China and India have also donated some of their vaccines.

Funding is only one issue delaying vaccine rollouts.

Another is patchy record-keeping in many public health systems, which experts say make it difficult to identify people who should be prioritised because of age or co-morbidities.

Demand for shots is also weak in some countries due to mistrust of health authorities, lack of education about the vaccines and worries about potential side effects.

Spotty electricity and poor transport links in some places add to the challenge, while medical teams will have to negotiate safe passage across parts of Democratic Republic of Congo, Mali, Somalia and other places where insurgencies rage.

John Nkengasong, who heads the Africa Centres for Disease Control and Prevention, says it could take until the end of 2022 to vaccinate 60% of the continent’s 1.3 billion people.

Take the task facing Mali, an impoverished country fighting an Islamist insurgency. It needs $14.7 million to deploy vaccines, including for gasoline, vaccine storage and training, according to an internal government vaccination plan seen by Reuters.

The government will need funding support from the WHO, UNICEF, the GAVI vaccine alliance and the World Bank, the plan says. Those organisations are all looking to provide funding to African nations facing shortfalls.

It began distributing 132,000 vaccine doses from COVAX on April 7. However, authorities won’t start administering shots outside the capital Juba and its surrounding county until May at the earliest, said Kawa Tong, a member of a COVID-19 steering committee that advises the government.

“The key reason is the lack of funds for a rollout outside Juba. The transport of vaccines, training of health workers, community outreach – all these are tied to funding,” Tong told Reuters.

Adding to the difficulties, by May the rainy season will be well underway, cutting off transport links to large parts of the country, she said. The vast majority of the 11 million-strong population live outside Juba county.

“There’s no challenge in regards to the vaccine rollout,” he added.

The World Bank, which has a $12 billion fund to help developing countries around the world buy and distribute vaccines, said it was reviewing requests from Mali and South Sudan.

The bank said it has approved $2 billion to 17 countries, including seven in Africa: Ethiopia, Cape Verde, Ivory Coast, Eswatini, Tunisia, Rwanda and Gambia.