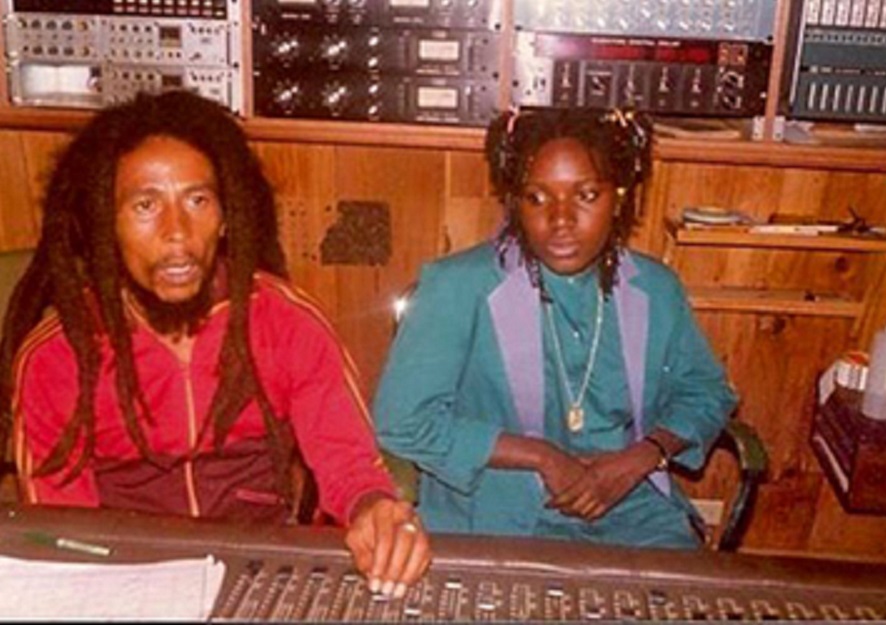 Bob Marley‘s career after he broke out as a young Jamaican musical sensation spanned just ten years yet his global fame was apparent before he turned 30. Marley, via Bob Marley & The Wailers, was already known to many in the Caribbean, the United States and the United Kingdom before an attempt was made on his life in Jamaica in 1976.

By the late 1970s, he was playing in Africa, a continent he espoused so much love for. He was in Kenya and in Ethiopia in 1978. Of course, Ethiopia, the home of the Rastafarian saint Haile Selassie, was always going to be on Marley’s list of destinations. He was also in Zimbabwe where he was the special musical guest to mark that country’s independence in 1980.

However, it was in Gabon that year that Marley found love in the embodiment of Pascaline Mferri Bongo Ondimba, the daughter of El Hadj Omar Bongo Ondimba, born Albert-Bernard Bongo. The Bongo name has been synonymous with Gabon for so long because Omar ruled that country from 1967 to 2009, only to be succeeded by his son, Ali.

Marley became intimately close to Pascaline but according to the latter’s own version of events, their actual first meeting was in 1979 in the US, making the meeting in 1980 a reunion of a sort.

“The first time I met him was in America in 1979 and when we went backstage when he saw me, he said “Gosh you’re ugly”,” Stephanie said in the Ken MacDonald-directed documentary Marley (2012). Stephanie was in the States with her father and went to see Marley perform in Los Angeles. She managed to secure a backstage pass to meet the musician who was unfortunately not impressed by her looks.

However, according to Bob Marley and the Dictator’s Daughter written by Anne-Sophie Jahn, it was Pascaline who invited Marley to perform in Gabon. It would seem even after Marley’s rude remark, the 23-year-old’s spirit had not been broken on that night. Her invitation was welcomed by some members of The Wailers who had never seen the motherland they sang of.

Marley and his crew were not received by Omar, the head of state who also went by the unofficial title of “king”. Omar sent future president Ali to meet Marley and his company. This snub was not lost on The Wailers since they were essentially on a state visit to play at Omar’s birthday party. It later also dawned on them that Omar was a dictator who developed the parts of Gabon that mattered to him while the rest of the country laid in abject poverty.

However, according to Pascaline, Marley was not personally offended by Omar because “he [Marley] told me that my father had been the only one to suggest that Haile Selassie move to Gabon after he was dethroned. And that the Rastafarians felt that this was a strong act that deserved their respect and admiration”.

Perhaps, Marley’s ability to transcend the immediacy of the disappointment that confronted him in Gabon, to give Omar the benefit of doubt, endeared the musician to the “king’s daughter”. In MacDonald’s film, Pascaline did present Marley as a deeply thoughtful and philosophical man. They were in love, she revealed. It was known among The Wailers and many others yet it was not everyone’s to know.

Marley had many lovers, including 1976 Miss World Cindy Breakspeare, mother of singer Damian Marley. He married Rita in 1966 but by his own account, it was possible some of his children were unknown to him. He knew he had fathered eleven by seven women.

Pascaline reveals that knowing who Marley was, she was on the pill. She liked him and wanted to be around him but “[h]e was a Rasta and his philosophy was to share everything. And it wasn’t his fault that the girls jumped on him. They all knew he was married… but he was a superstar.”

The president’s daughter was in Marley’s life even until the latter days when Marley’s skin cancer gave doctors a hint that the reggae legend did not have much time to live.