Why this legendary Black architect drew upside down

Why this legendary Black architect drew upside down 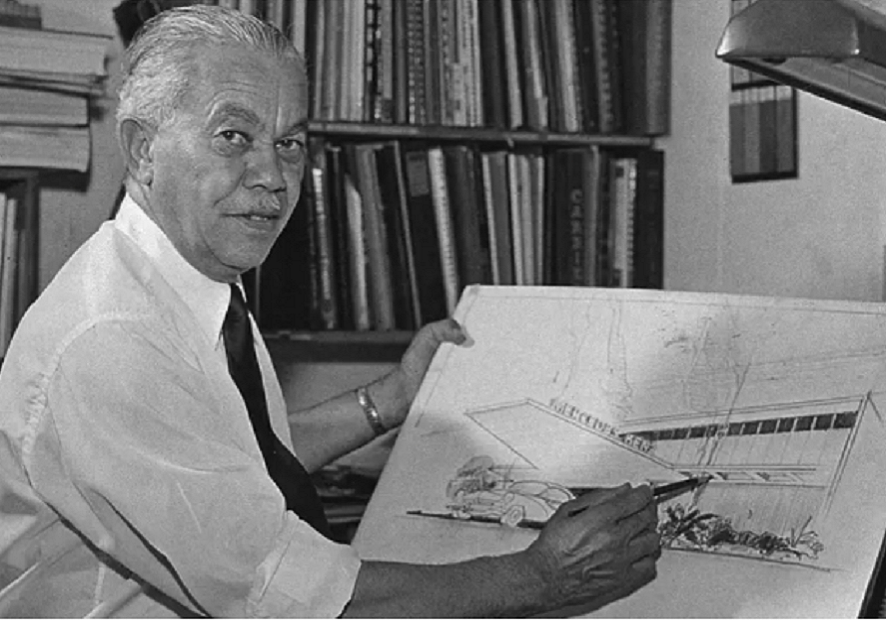 Growing up, all Paul Revere Williams wanted to do was to design homes for families. He lost his own family at a very young age. His parents, Chester and Lila, died of tuberculosis before he turned four. While living with a family friend, he made it to known to all that he would love to be an architect. “Your own people can’t afford you, and white clients won’t hire you,” was one of the warnings he received. He ignored all the warnings.

Today, his signature is on 3,000 buildings in Los Angeles, and the iconic script of the Beverly Hills Hotel sign is written in his hand.

Born in Los Angeles in 1894, the trailblazing Black architect helped build and shape modern L.A., designing homes and commercial buildings from the early 1920s. Some have called him the “architect of the stars” as he designed a lot of houses for Hollywood moguls. During Hollywood’s heyday, most celebrities lived in neighborhoods like Beverly Hills, the hills of Bel Air, and Hancock Park. What is not widely known is that their plush estates were designed by a Black architect.

Williams built an elegant bachelor pad for singer Frank Sinatra, according to a report by NPR. He also designed homes for Lucille Ball and husband Desi Arnaz as well as Cary Grant. For Danny Thomas, he designed St. Jude Children’s Hospital in Memphis gratis, as a favor to him, the report said. At the Beverly Hills Hotel, Williams designed the famous Polo Lounge, the Crescent Wing and the Pink Palace’s signature loopy signage, the report added. Ellen DeGeneres, Denzel Washington, and Andy Garcia have also lived in Williams’ homes.

“He tapped into the desire of his clients to live lavishly and elegantly, in a way they never had,” Kathy McCampbell Vance, who co-produced a documentary on Williams, was quoted by FastCompany. “His strength was that he designed for the client, [whereas] some architects have a design style and the clients adapt.”

A pioneer in a field with few architects of color, he was kept out of many of the neighborhoods in which his homes were located because of his race. “By law, he could not live in some of the places [where he designed homes]. Particularly in Flintridge, where he designed his first home in his own office, the land deed said a black person could not even spend the night,” his granddaughter, Karen E. Hudson, who has been chronicling his life, told NPR.

Indeed, Williams had to overcome prejudice to design homes. He thus learned to draw upside down so he could sit across from his white clients, not next to them. “He taught himself to draw upside down so white clients wouldn’t be uncomfortable sitting next to him,” said Hudson, adding that the upside-down technique became one of the things he was known for. What’s more, Williams always had his hands clasped behind his back when touring construction sites. Being a Black man, he knew that not everyone would like to shake him, so with his hands behind his back, he gave people the option of extending their hand first, according to NPR. In spite of the challenges, Williams believed that for every home and every commercial building that he could not buy and that he could not live in, he was opening doors for the next generation, his granddaughter said.

And he did just that. Apart from his work for celebrities, he also did a lot of cultural projects and visionary projects, as well as public housing, said Milton Curry, the dean of the architecture school at USC. Williams also designed some structures in L.A.’s Black community including the 28th Street YMCA in South Central and Broadway Federal Bank in Mid-City.

Williams, the first Black architect certified on the West Coast, was also the first Black member of the American Institute of Architects and the first to receive its highest honor Gold Medal, posthumously in 2017.

“When you enter one of his spaces, it seems that nothing is accidental,” artist and photographer Janna Ireland said of Williams’ architectural works. “Everything is the way it is supposed to be, everything is done according to a plan.”

Inspired by the Tulsa race riots, she quit her job to build an app connecting users to Black businesses
Booker Prize: Kenya’s Ngũgĩ wa Thiong’o acknowledged for writing in an indigenous African language