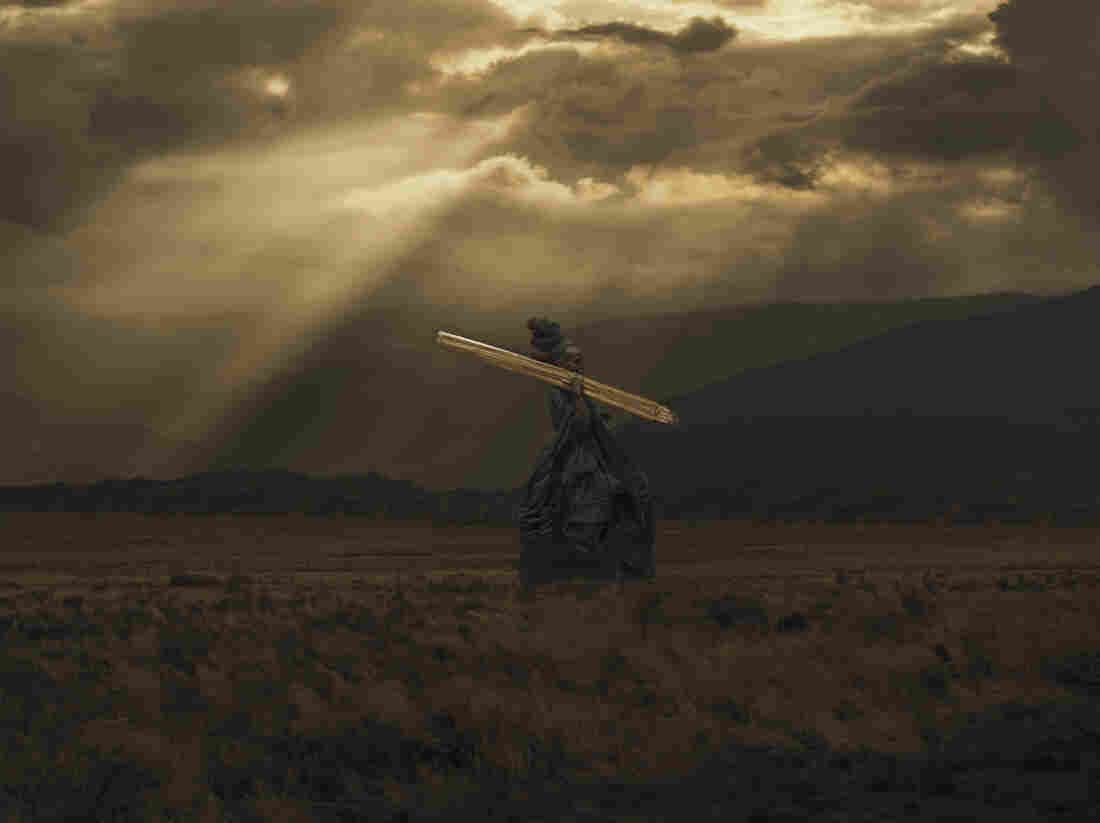 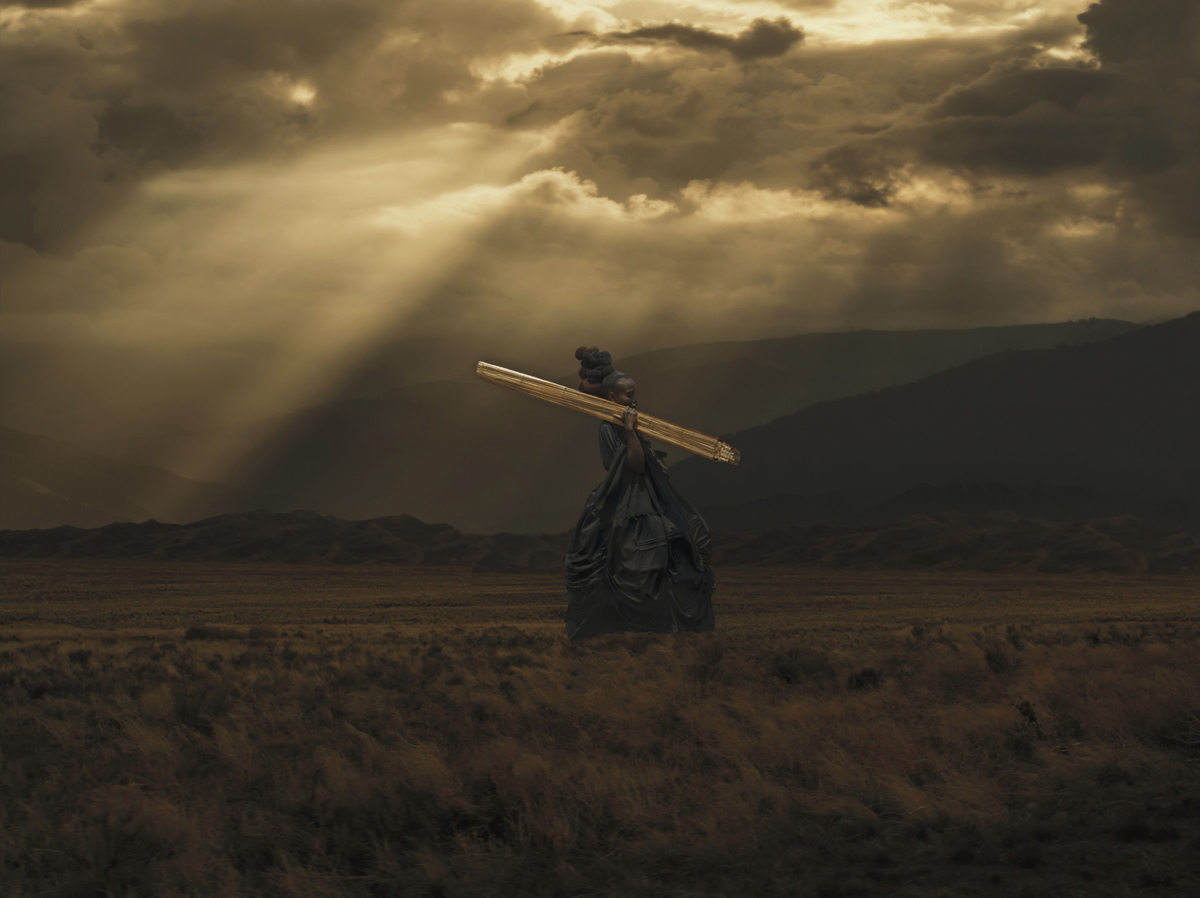 In Rwendo, an African woman in an old-fashioned satin gown traverses a somber landscape.

The photo is as alluring as it is mysterious. Adorned in a regal, old-fashioned black satin gown and a majestic hairstyle piled high atop her head, a stately young African woman fearlessly traverses an uninhabited, cloud-darkened landscape, with a rolled-up woven sleeping mat balanced on her shoulder. She appears to be on a journey. But to where?

The destination is left to the imagination of the viewer, but there is little doubt that the 27-year old Zimbabwe-based photographer Tamary Kudita is engaged in following her own artistic vision. This photo is one of 17 in a series titled “African Victorian.” Each is as evocative as the next in its stunning juxtapositions of Africa’s colonial history, seen in the blend of Victorian fashion with African culture. The series has been exhibited in galleries in Zimbabwe and New York, and in April, one of the images won a 2021 Sony World Photography Award. 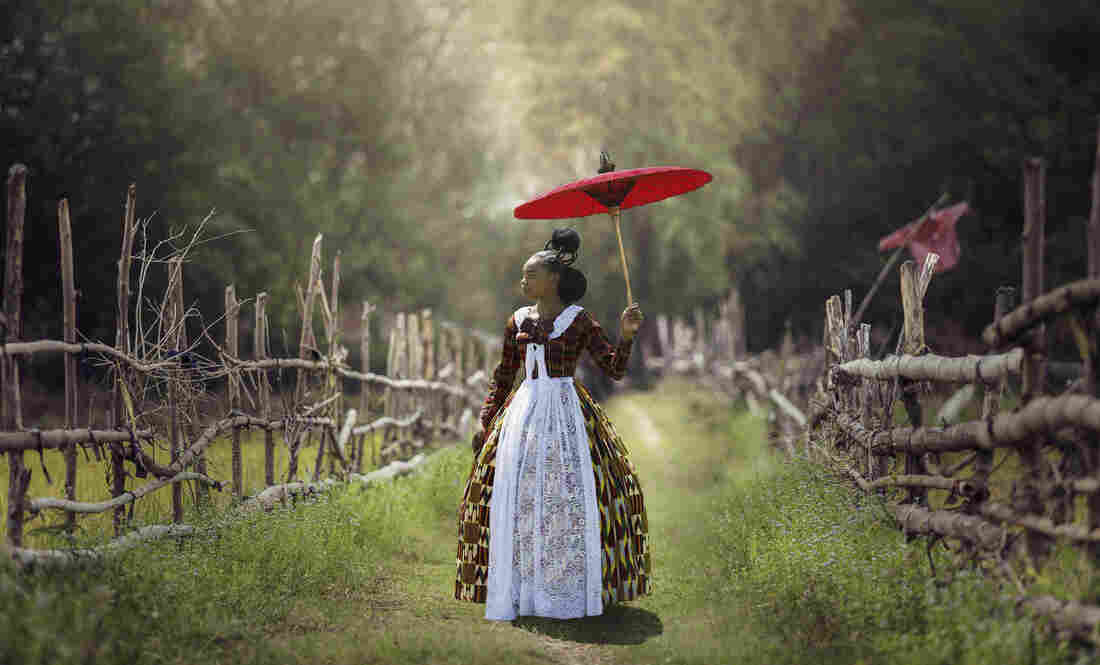 In Voyages of an African Victorian, a woman wears a Victorian-style dress made of African fabrics. Tamary Kudita hide caption 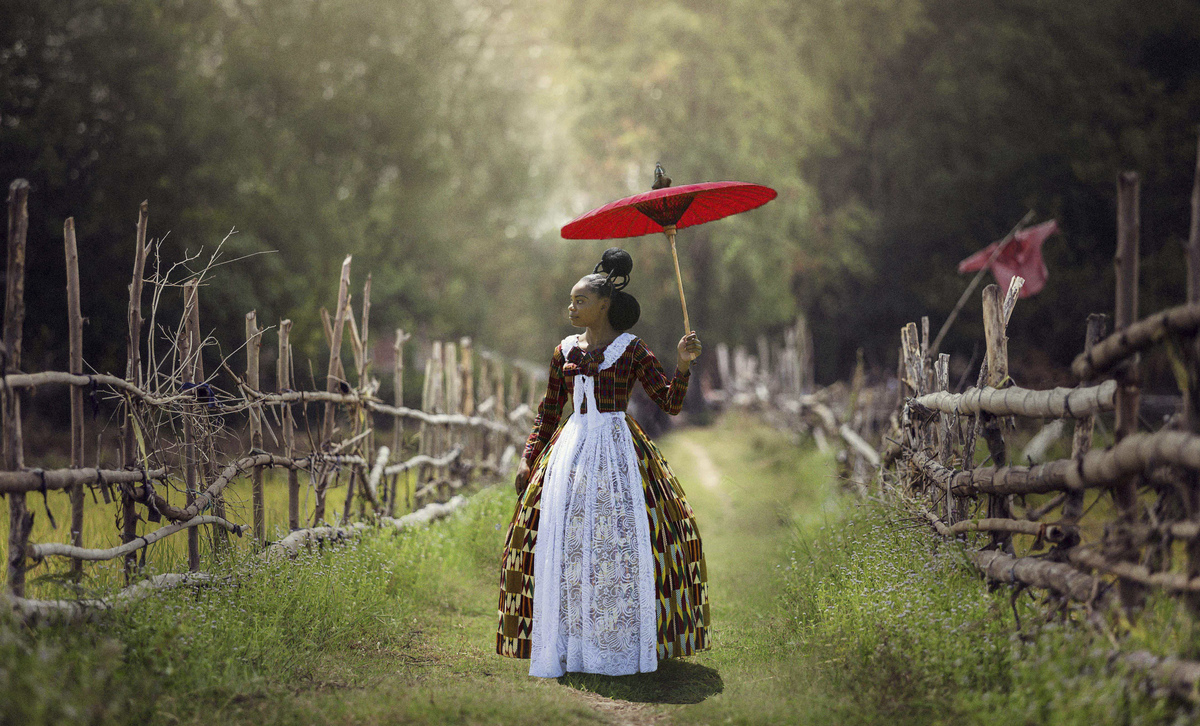 In Voyages of an African Victorian, a woman wears a Victorian-style dress made of African fabrics.

Her goal in “African Victorian,” Kudita says, is to make visible in her work the impact of her country’s colonial experience on African life and identity today. It is a subject that also speaks to her personally as a descendant of the Shona-speaking people of Zimbabwe and an Anglo ancestor who had settled in the historical Boer state in Southern Africa.

We spoke to Kudita, who is based in Harare, about the inspiration for her photos and the themes that suffuse her work. This conversation has been edited for clarity and length.

What led you to create the “African Victorian” series?

I studied fine arts at Michaelis School of Fine Art at the University of Cape Town. For my final fourth year project, I wanted to uncover the story of my origins and understand more about the people who shaped me. I also wanted to look into how the country’s colonial experience has shaped contemporary life.

I called that project “Maintaining Memories.” I decided to replicate my family photo albums from the African side of my family with contemporary people standing in as the family members, from my great-great-great grandparents down to my great grandparents. I used this as a stepping stone for “African Victorian.”

In “African Victorian,” I wanted to use the two sides of the family lineage. I wanted this to [show and] be an extension of my dual heritage. 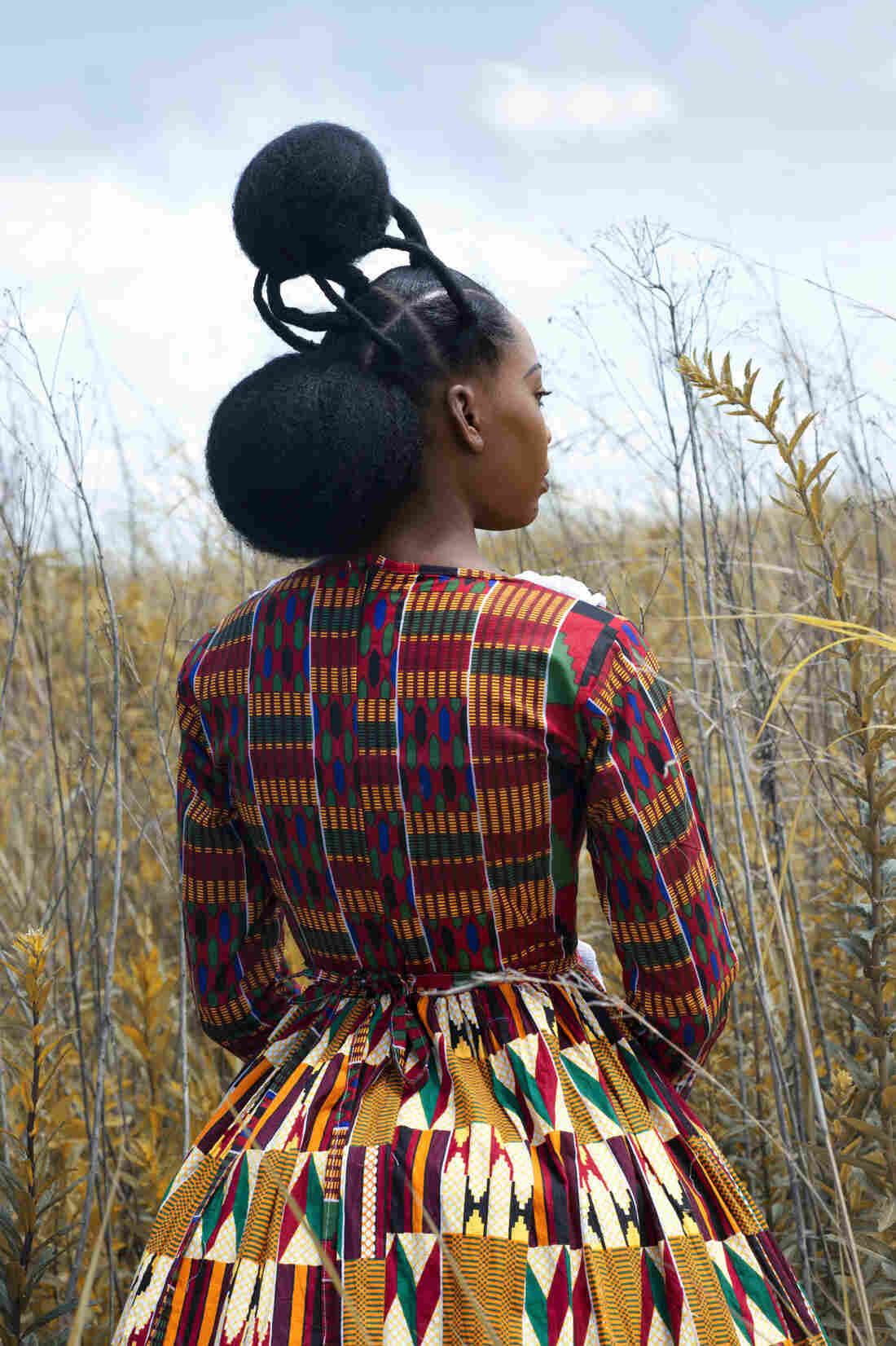 Tell us about your dual heritage.

How did your family story lead to “African Victorian”?

Looking at this interracial union inspired me to continue to find ways to communicate the hybridity that laces African identity. In these photos, I try to reframe history and find new ways to see and amplify the experiences of Black women. I hope to show the many different ways we can narrate history, that there are collective identities and there are also individual and incredibly diverse stories. All these together shape our self-perception.

I also like to examine dualities in my work. That includes the polarities of modernity and tradition. But instead of looking at modernity as a rejection of tradition, I look at the interface which could inspire congruence and mutual influence.

You use fabric and clothing in your photos to bring out some of these dualities. What are some examples?

In “That Evening Sun Goes Down,” I wanted to idealize and place great importance on something as ordinary as cooking. The black satin fabric symbolizes being regal, and the dresses serve as metaphorical curtains that have obscured African narratives by discarding them. The dresses also serve as signifiers that cooking is a task that extends cross-culturally, and [help bring out] similarities in ideals [across cultures] of femininity.

Do you design the clothing yourself?

I sometimes draw sketches for what I want the outfit to look like, and I collaborate with a local designer who makes the outfits come to life. The fabrics are all from African countries, including Ghana and Nigeria.

Objects and backdrops are also important in your work. Why is that?

I like to use elements that are connected to and are signifiers of tradition, often everyday objects used for everyday activities, like the large African cooking pot and utensils [in “The Evening Sun Goes Down”]. These are still used today to cook volumes of food for large gatherings, such as a wedding. 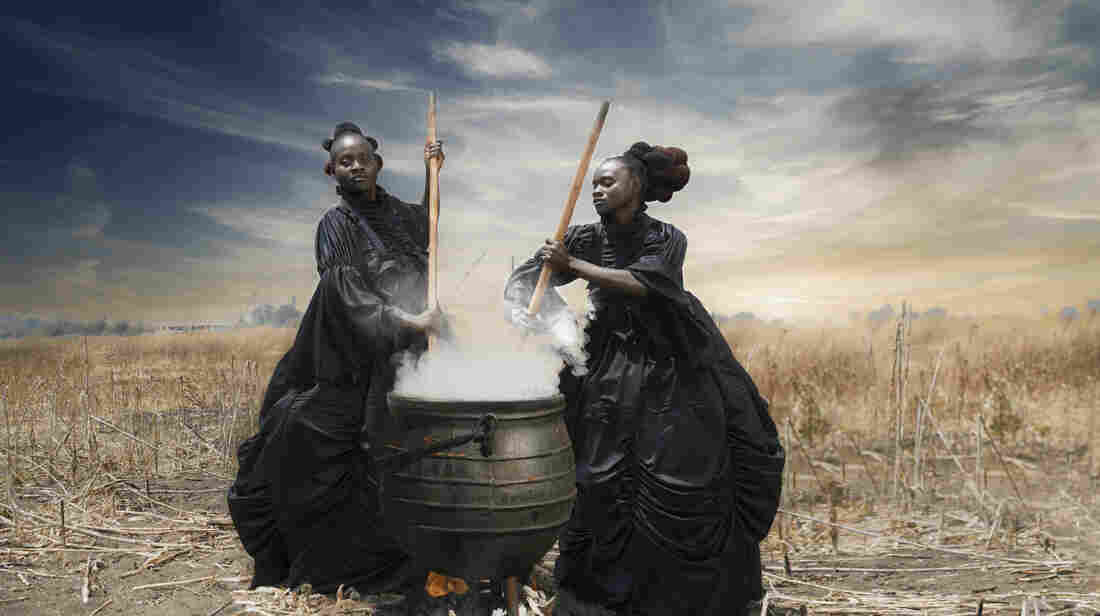 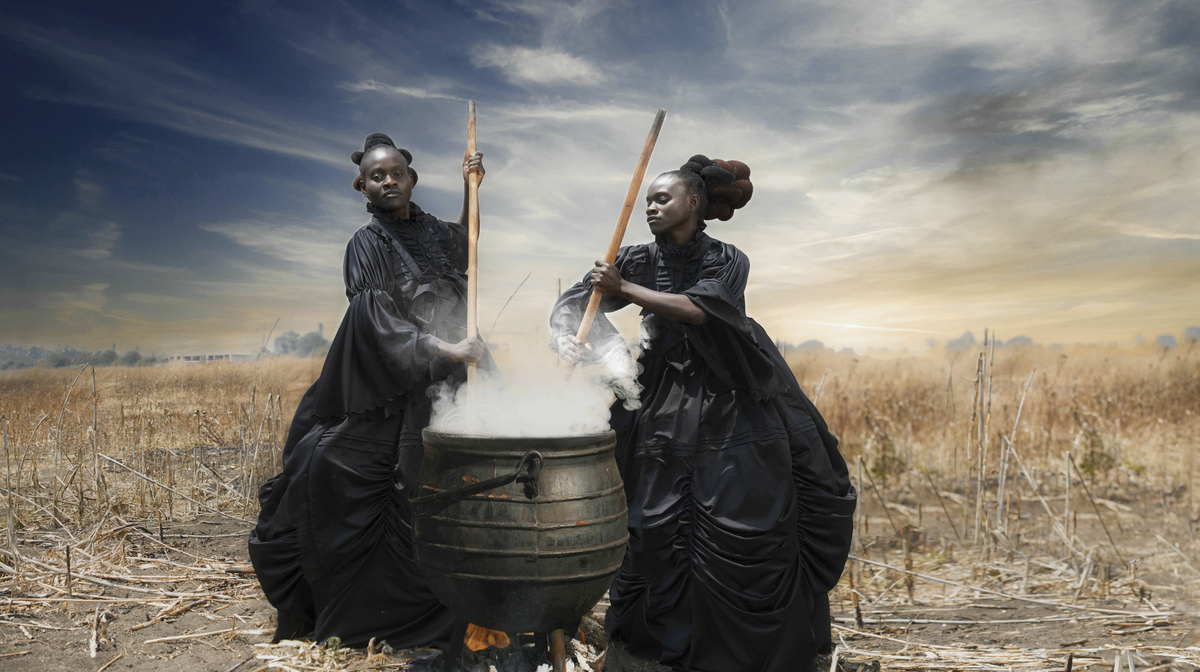 What about the headdress made from a bouquet of corn in “Lady With Corn”?

I used corn because it has been a basic grain in Zimbabwe for centuries, and it shapes some of our daily meals. The corn wasn’t necessarily meant to translate into a hairstyle; I did that to create a silhouette which plays on the portable nature of corn among cultures. 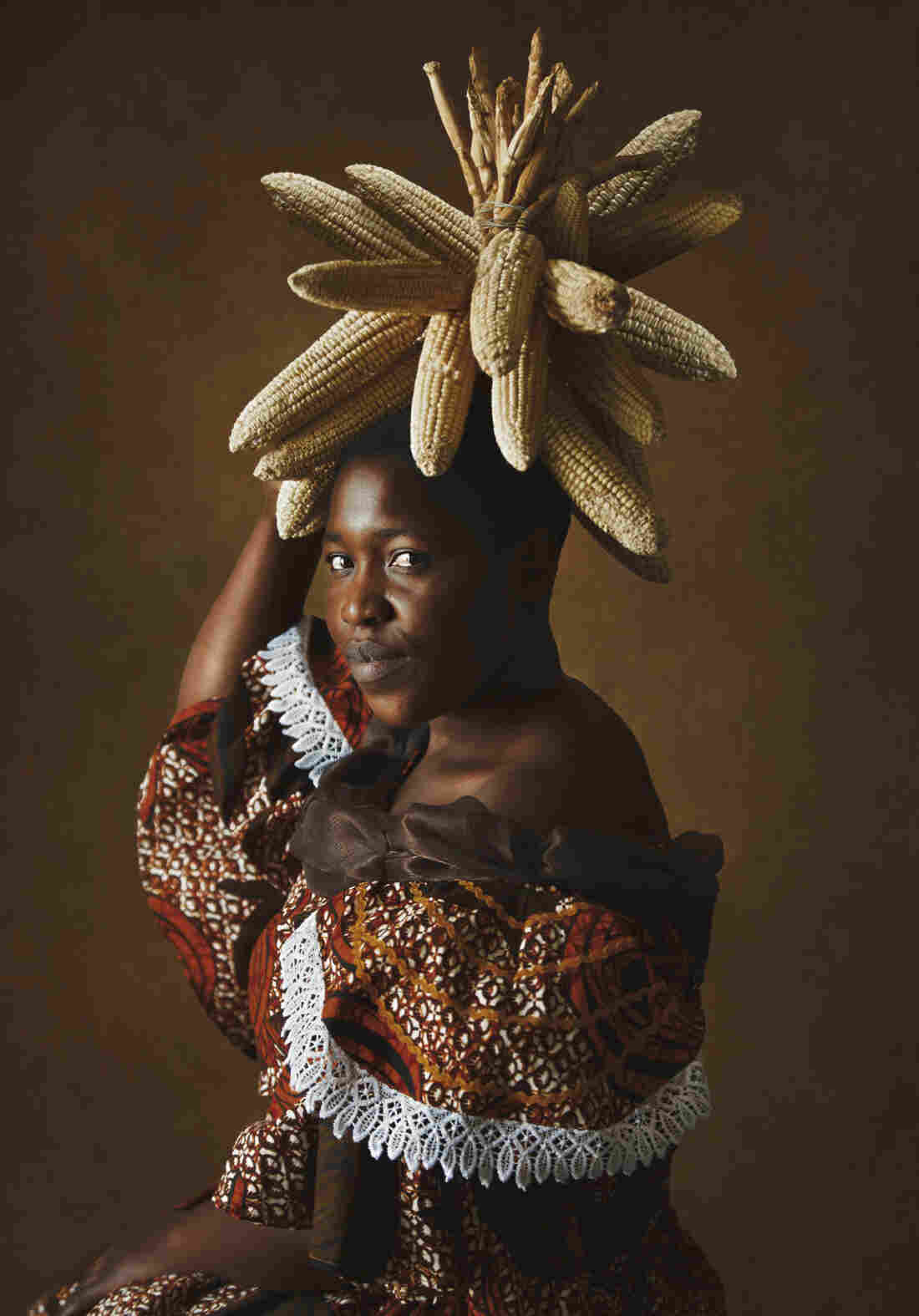 And the headdress of a ship in “Vessel” — where did that idea come from?

This image was inspired by a children’s book, “The Lady With a Ship on Her Head.” I decided to use the ship model as a headdress as a way of communicating the journey, a voyage of life which dates back to the precolonial and post-colonial eras of Zimbabwe.

So the ship model serves as a historical reminder of slavery and colonial history. Anything else?

The lady is the vessel and is on a passage to an environment that is free of oppression. 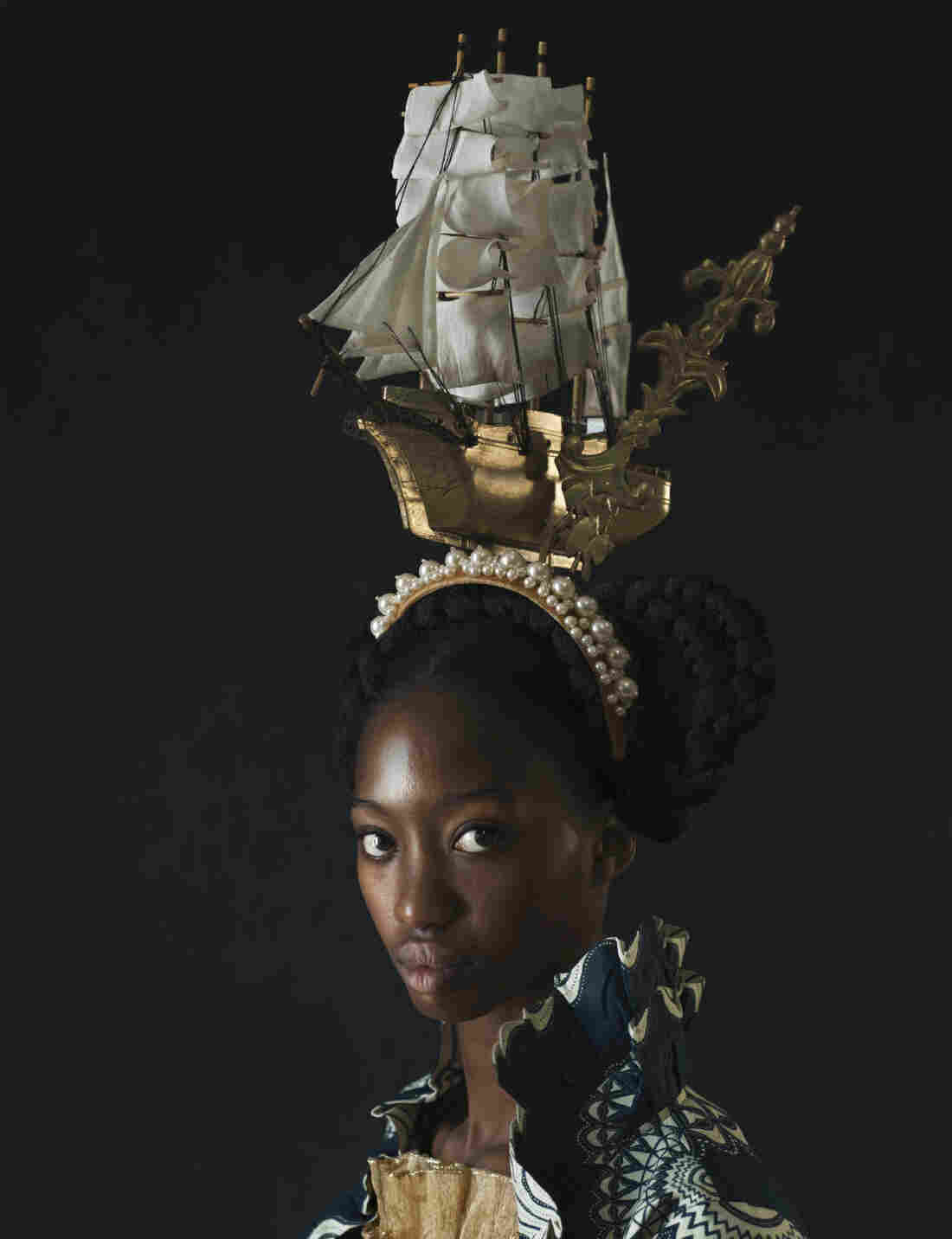 Vessel. This headdress was inspired by the children’s book “The Lady With A Ship on Her Head,” says Kudita. The ship, she says, is a reminder of the transport of slaves but also can provide passage to a future free of oppression. Tamary Kudita hide caption 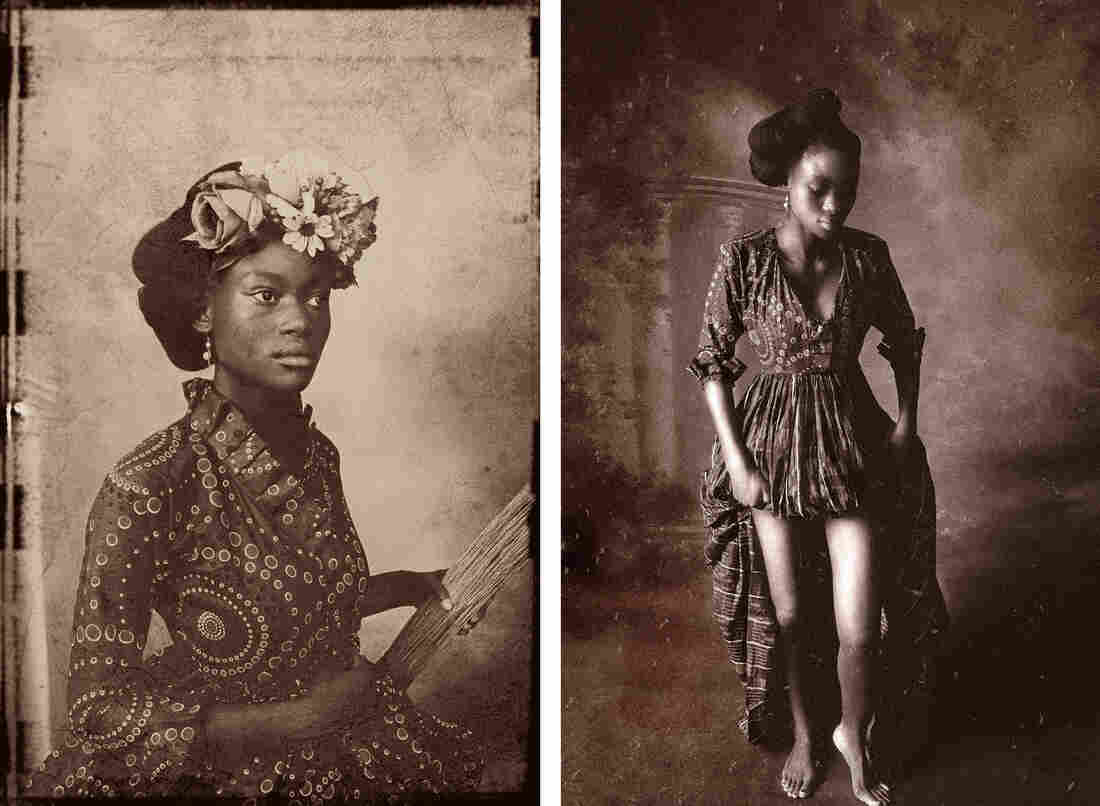 These portraits connect the art of the West — two Rembrandt works — and Africa. Sight Unseen I (left), inspired by Rembrandt’s portrait “Sakia as Flora,” brings in a broom as an African implement. In Sight Unseen II, modeled after his painting “Bathsheba at Her Bath,” a woman lifts her dress as if she were stepping into a stream. Tamary Kudita hide caption

Do I also see influences of Rembrandt in two of your photos? Is that why you call these “Sight Unseen,” for what you’re asking us to see?

Yes. I am reframing history, responding to looking at Black women and finding a new way to amplify their experiences.

In “Sight Unseen 1,” I attempt to demythologize Rembrandt’s portrait, titled “Sakia as Flora,” by incorporating a broom, a traditional African and domestic tool.

In “Sight Unseen #2,” I decided to pose my model [next to a stream of water] after Rembrandt’s “Bathsheba at Her Bath” to show interconnectedness and similarities between Western and African cultures.

I use sepia tones in both to pay tribute to and show how the old can inform the new.

What do you like about photography as an artistic medium?

Photography allows me access to places I wouldn’t have had access to historically. I am making my own rules in the photos. I am creating my own world.

Diane Cole writes for many publications, including The Wall Street Journal and The Washington Post, and is book columnist for The Psychotherapy Networker. She is the author of the memoir After Great Pain: A New Life Emerges. Her website is DianeJoyceCole.com.