Police officers under fire for taking photo with Black… 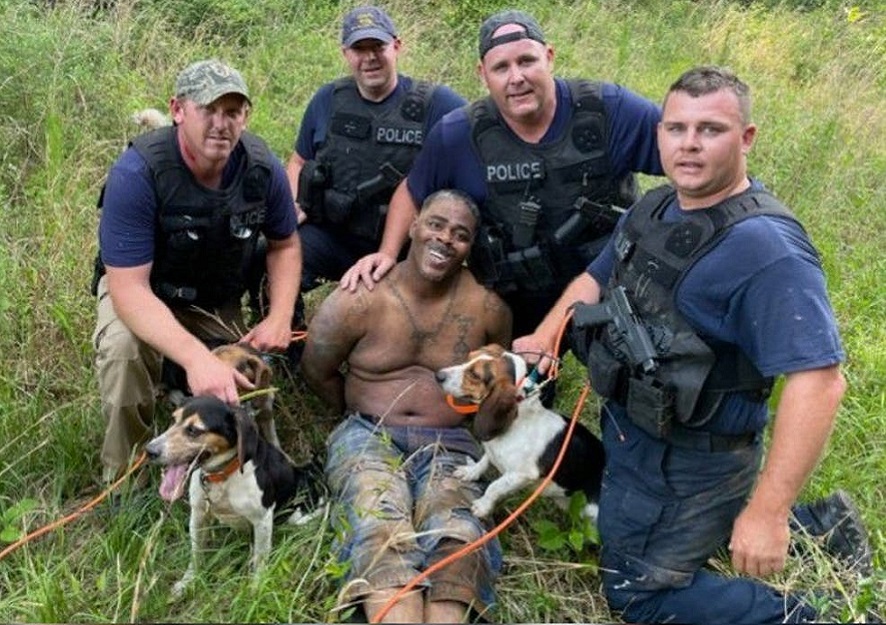 Four White police officers who took a photo with a captured Black armed robbery suspect while smiling with dogs have been condemned on social media for their action.

According to the Independent, the officers in the photo are from the Prentiss Police Department. The suspect, identified as Eric Boykin, was arrested following a manhunt after he allegedly robbed a bank. He was apprehended in a wooded area not far from the financial institution.

After the photo in question made its way onto social media, people were quick to condemn the officers as well as the police department – labeling the image as racist and likening it to a trophy hunt. The story and photo were shared by WLBT on Twitter but the news outlet deleted it from the social media platform following backlash.

“So either 1) none of the people involved, from the officers to the news station to the staffer who posted this, realized what a bad look this is or 2) they do know how it looks, and that’s why they posted it. Those are the only two possibilities! and they are both very very bad,” Josie Duffy Rice, a criminal justice system reporter, posted in reference to the image and the manner by which WLBT first reported the story.

“This picture has a very unsettling ‘big game hunt’ vibe. Like, how did it come about? “Hey guys, gather ’round so we can remember this moment, bring the dogs!” I hope I’m wrong,” a user also tweeted.

Another user wrote: “Omg. The cops look like they are posing with a lion or deer they shot. This is f***ked up.”

But in an interview with the Daily Mail in the wake of the backlash, Prentiss Police Investigator Richard Browning denied the officers in the photo were part of the town’s police force, adding that they probably came from Louisiana to assist with the manhunt.

“I didn’t even know about the photo until reporters started calling me,” Browning said. “It’s unfortunate. I agree that it’s in poor taste.”

Just weeks after he was made redundant, he unveiled his own wealth management company
Europe addresses Africa’s vaccine dilemma – DW (English)