Dubbed the ‘Giants of Egypt’, these siblings just nabbed… 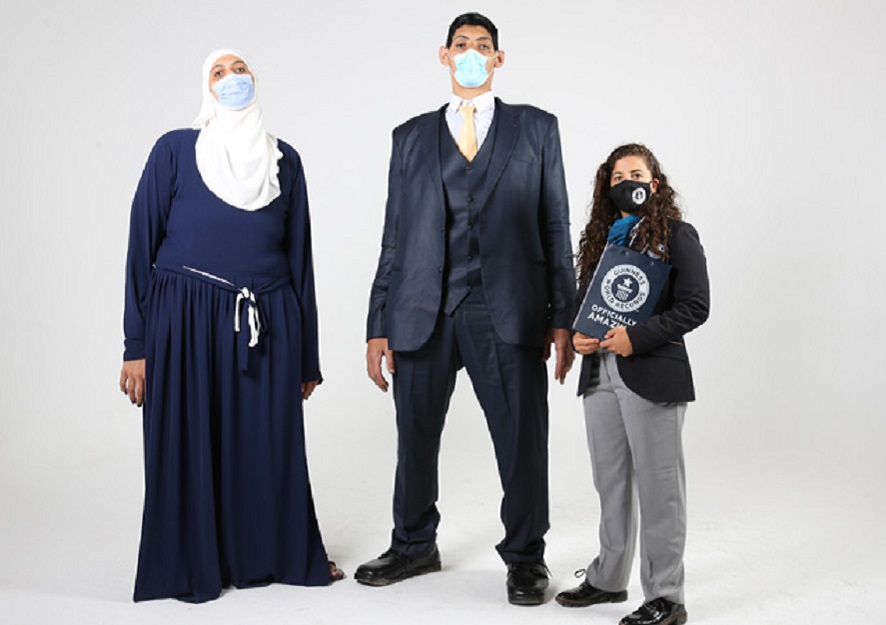 Two Egyptian siblings felt out of place since age 12 after developing a condition that causes excess production of growth hormones. Fast forward to more than a decade after their diagnoses, Mohamed Shehata and Huda Shehata hold five Guinness World Records between them after their hands, feet, and arm spans were measured.

They both have a benign tumor of the pituitary gland that accounts for their impressive sizes. From the look of things, they may require surgery to stop the excessive growth hormone. According to Mohamed, their limbs are “growing unreasonably.”

“Since the age of 12, my life has been turned upside down. I wasn’t used to the new lifestyle of tall people. Everything seems small in my hands, even shaking hands with people has become a reminder of how I differ from others,” Mohamed said in a statement.

Huda said although she did not get to live a normal life, she takes consolation in the fact that she has a few world records to her name, Gulf News reported.

“I could not live my life as other women did,” Huda said in a media statement. “I hope the recognition of Guinness World Records will change my life forever. I have always dreamed of dressing like other women, but I accept myself now and live with satisfaction and conviction.”

According to Guinness World Records, the siblings have a combined height of 414.4 cm (13 ft 7 in) – nearly as tall as a London double-decker bus!

Guinness World Records Adjudicator Kenzy Defrawy flew to Egypt and met the siblings in a local clinic to authenticate their measurements.  She was ably assisted by a Professor of Orthopedic Surgery, Dr. Khaled Emara, and his medical staff Dr. Mahmoud El Shopaky and Dr. Mohamed Nour.

Defrawy then gave the siblings their official world titles in the presence of their family and the doctors at the clinic.

The Shehatas live in a small village 90 minutes from Cairo with their mother Rouhiya Abdulaziz. Since their sizes are larger than the average human, they tend to have their clothes custom-made by their local tailor, Terzi, who produces mostly Galabiyah, (a loose-fitting garment) for them.

Terzi sees them each year to alter their clothing to make room for their annual growth.

Huda and Mohamed’s excessive growth began before puberty. Usually, when it begins before that stage, it can lead to gigantism, experts say.

The tallest man living, Sultan Kösen, from Turkey, opted for surgery in 2012 to treat a similar condition at the University of Virginia. His was acromegaly, which also develops when a benign tumor of the pituitary gland produces too much growth hormone.