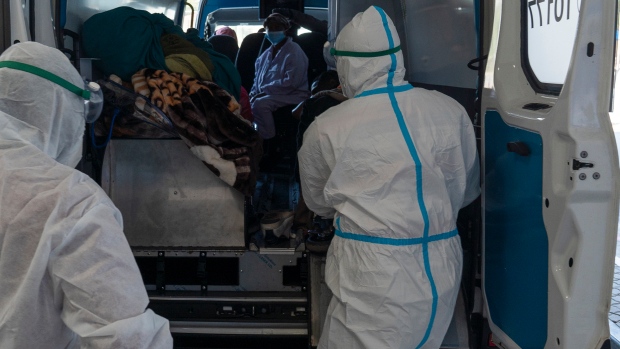 JOHANNESBURG — The World Health Organization is in talks to create the first-ever technology transfer hub for coronavirus vaccines in South Africa, a move to boost supply to the continent that’s desperately in need of COVID-19 shots, the head of the UN agency announced.

The new consortium will include drugmakers Biovac and Afrigen Biologics and Vaccines, a network of universities and the Africa Centres for Disease Control and Prevention. They will develop training facilities for other vaccine makers to make shots that use a genetic code of the spike protein, known as mRNA vaccines.

“We are now in discussions with several companies that have indicated interest in providing their mRNA technology,” said WHO director-general Tedros Adhanom Ghebreysus at a virtual press briefing on Monday. That technology is used in the Pfizer-BioNTech and Moderna vaccines.

Africa will soon be able to “take responsibility for the health of our people,” as a result of the new WHO-backed technology transfer hub, South African President Cyril Ramaphosa said in the press briefing.

It is “just not equitable and not fair” that some people are denied access to COVID-19 vaccines because of where they live, Ramaphosa said.

Poor countries in Africa and elsewhere are facing dire shortages of COVID-19 jabs despite some countries having the ability to produce vaccines, lamented Lara Dovifat, a campaign and advocacy adviser for Doctors Without Borders.

“The faster companies share the know-how, the faster we can put an end to this pandemic,” she said in a statement.

Numerous factories in Canada, Bangladesh, Denmark and elsewhere have previously called for companies to immediately share their technology, saying their idle production lines could be churning out millions of doses if they weren’t hampered by intellectual property and other restrictions.

More than 1 billion coronavirus vaccines have been administered globally, but fewer than 1 per cent have been in poor countries.

South Africa accounts for nearly 40 per cent of Africa’s total recorded COVID-19 infections and is currently suffering a rapid surge, but vaccine rollout has been slow, marked by delayed deliveries among other factors.

South Africa currently does not manufacture any COVID-19 vaccines from scratch, but its Aspen Pharmacare assembles the Johnson & Johnson shot by blending large batches of the ingredients sent by J&J and then putting the product in vials and packaging them, a process known as fill and finish. Earlier this month the company had to discard 2 million doses because they had ingredients produced in the U.S. in a factory under suspect conditions.

“The climb in new cases has been extraordinarily rapid and steep over the past few weeks,” Ramaphosa said Monday in his weekly letter to the nation. “The number of daily new cases jumped from below 800 in early April to more than 13,000 in the past week. In other words, it increased more than 15-fold from the last low point.”

Gauteng province, the country’s most populous with the cities of Johannesburg and Pretoria, is the worst-affected by the current surge with 60 per cent of the new cases. All public and private hospitals are full, yet the numbers of new confirmed cases continue to rise, the province’s deputy premier, David Makhura, said Monday.

“I don’t want to send a message saying everything is okay,” said Makhura. “I want to say to the people of the province: The house is on fire.”

WHO officials said that while their new vaccine transfer technology will hopefully increase future supplies, it won’t address the immediate crisis, since it will take months for any new factories to start producing shots.

With dozens of countries desperately waiting for more doses after the COVAX initiative, a UN-backed plan to distribute vaccines to poor countries faltered in recent months, the WHO has been trying to persuade rich countries to donate vaccines once their most vulnerable populations are immunized.

He added that while transferring vaccine technology will help in the medium to long term, it won’t help stem the current spike in infections.

“We have not used the vaccines available globally to provide protection to the most vulnerable,” he said. ”And the fact that we haven’t … is a catastrophic moral failure.“

From Haiti to U.S., one refugee’s dream of becoming a restaurateur comes true – here’s how
Telfar to launch sportswear – FashionUnited UK

Where do vaccine rollouts across…

A Multi-Campus University in South…