Meet the original Black Panthers who crushed the Nazis… 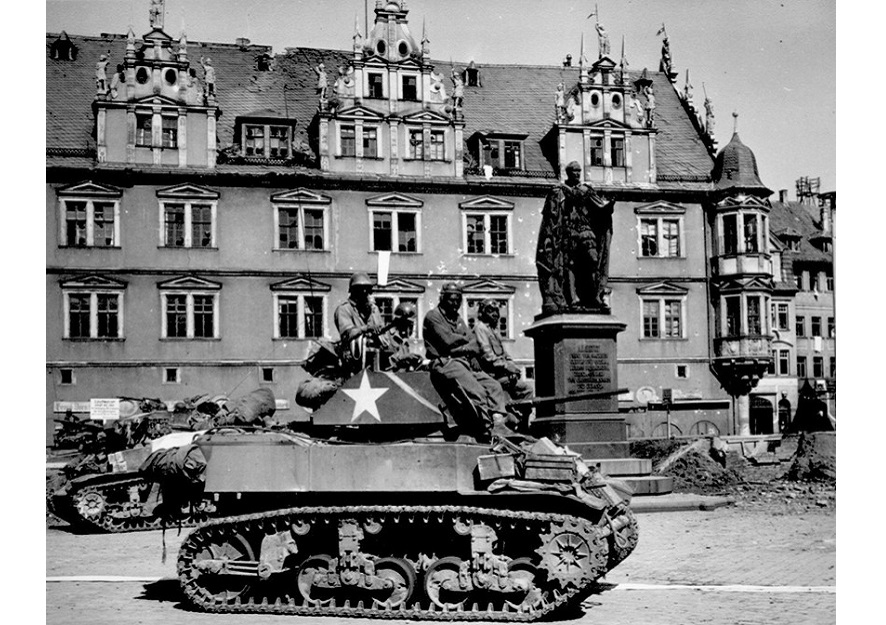 History says that even though the U.S. military would remain stiffly segregated until 1948, men of all races around the country volunteered for service when Pearl Harbor, a U.S. naval base near Honolulu, Hawaii, was attacked in 1941. Black people who volunteered mostly ended up in combat support roles having been sent to segregated units and divisions. But there were units of African-American soldiers such as the 761st Tank Battalion that served major roles in operations of the military.

The 761st tank battalion, better known as the Black Panthers, would become the first African-American tank squad to see combat in World War II. By the end of the war in Europe, the Black Panthers had fought their way further east than nearly every other American unit, receiving 391 decorations for their bravery.

When it was formed in the spring of 1942 in Louisiana, its commanding officer, Lt. Colonel Paul L. Bates, knew very well that Black soldiers and especially tankers were racially abused. Thus, he pushed the battalion to achieve excellence, as stated by History. The battalion had 30 Black officers, six white officers, and 676 enlisted men. Among the men serving in the 761st was baseball star Jackie Robinson, but he never saw combat overseas after refusing to give up his seat on a military bus and was court-martialed in 1944.

The 761st would go on to make history. The unit got its nickname “Black Panthers” in reference to the panther patches they wore on their uniforms, according to History. After arriving in Normandy, France in October 1944, the 761st was assigned to General George S. Patton’s Third Army. Patton spoke with the troops: “Men, you’re the first Negro tankers to ever fight in the American Army. I would never have asked for you if you weren’t good. I have nothing but the best in my Army. I don’t care what color you are as long as you go up there and kill those Kraut sons of bitches. Everyone has their eyes on you and is expecting great things from you… Don’t let them down and damn you, don’t let me down!”

With its motto being “Come Out Fighting!”, the majority-Black military unit surely did not disappoint. Entering combat on November 7, 1944, the 761st served for over 183 days straight under General Patton. Meanwhile, front-line troops rarely spent more than a few weeks on the front lines during the war. The 761st fought in France and Belgium and did become one of the first American battalions to meet the Russian Army in Austria. The unit also broke through Nazi Germany’s Siegfried line, making it possible for Patton‘s troops to enter Germany.

The battalion also participated in four major Allied campaigns including the Battle of the Bulge in the Ardennes region of Belgium, which was Adolf Hitler’s last major offensive in World War II against the Western Front.

“During the Battle of the Bulge, the 761st was up against the troops of the 13th SS Panzer Division, but by January 1945, the German forces had retreated and abandoned the road, which had been a supply corridor for the Nazi army. By the end of the Battle of The Bulge, three officers and 31 enlisted men of the 761st had been killed in action,” History writes.

The Army awarded the unit with four campaign ribbons after the war. The 761st also received a total of 11 Silver Stars, 69 Bronze Stars and about 300 Purple Hearts. And even though the 761st fought just as gallantly as their White comrades, members of the unit who survived the war were shunned when they returned home largely due to racism. Staff Sgt Johnnie Stevens tried to board the bus from Fort Benning, Georgia, on his way home to New Jersey, but the driver refused to let him board, and called him “boy”, the Independent reported.

In later years, the unit would be greatly recognized for its heroism. In 1978, it received a Presidential Unit Citation, which recognizes units that “display such gallantry, determination, and esprit de corps in accomplishing [their] mission under extremely difficult and hazardous conditions as to set [them] apart from and above other units in the same campaign.”

Then in 1997, President Bill Clinton posthumously presented the Medal of Honor to seven men who had served in the unit. “Now and forever, the truth will be known about these African Americans who gave so much that the rest of us might be free,” Clinton said.

Michael Blackson proposes to girlfriend months after they broke up [Video]
Using satellites and AI, space-based technology is shaping the future of firefighting – NBC News