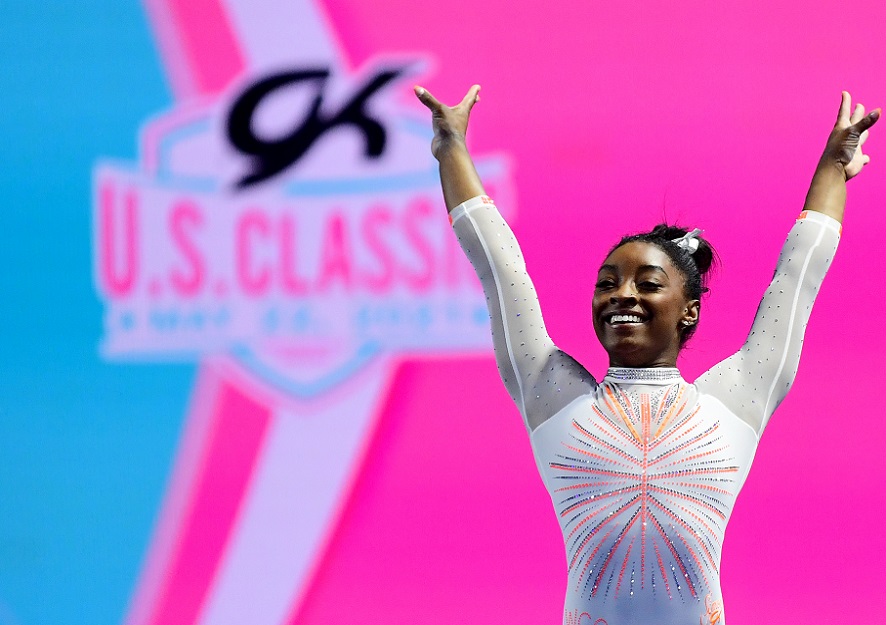 Simone Biles is arguably the most accomplished gymnast in U.S. history with 30 combined world championship and Olympic medals to her name. Of the 30, she has four Olympics gold medals and an Olympics bronze medal. The rest were won in other championships, both local and international.

She made her senior debut at the American Cup before competing at the City of Jesolo Trophy and helped the United States team win a gold medal. At the 2013 Artistic Gymnastics Championships, she placed first after a disastrous showing at the 2013 US Classic.

In 2015, she was first at the AT&T American Cup in Arlington, Texas. She represented the United States at the 2014 World Artistic Gymnastics Championships in Glasgow, Scotland, and won the competition three consecutive times.

Biles also represented the United States in the Summer Olympics in Brazil and won her first Olympics medal. She followed it up with a gold medal in the individual all-around category. Also, she won bronze at the balance beam final and gold in the women’s floor exercise final. In total, she won four Olympics medals.

Her success on and off the field means that Biles has amassed a fortune. According to Celebrity Net Worth, she is worth $6 million and counting. She makes money both on and off the field. The majority of her earnings come from brand endorsements. Some of the companies that have sought her appeal include Hershey’s, Nike, and Kellogg’s, Yahoo Finance reports.

Biles recently dumped Nike for the athleisure company Athleta over the former’s unfavorable maternity policy. She told The Wall Street Journal Athleta stands for everything she stands for.

As part of her deal with Athleta, she will develop her own activewear line and Athleta will also sponsor her tour to pull attention to U.S. gymnastics that has been rocked by sexual scandals. Should she win big at the Tokyo Olympics, her endorsements and paychecks are expected to grow big.

Despite being frugal, the athlete did splash the cash on porch mansions. In 2020, she announced on social media that she has purchased a new home and showed off a few pictures. It will be recalled that in 2017, she sold her childhood home in Houston for $289,000.

Biles grew up in hardship and so her idea of frugality is quite understandable. Her mother struggled with drugs and so she and her three siblings were adopted by her grandmother, Nellie, and grandfather, Ron. They nurtured her to the success she is enjoying now.

Using satellites and AI, space-based technology is shaping the future of firefighting – NBC News
What really happens to our unwanted clothes? – The Green News